​ We are beyond excited to announce that the “Great Grinduro Giveaway” fundraising campaign raised $58,585 to support Grinduro California’s partner organization, the Siskiyou Outdoor Recreation Alliance (SORA). All of that cash money is going directly to SORA’s Siskiyou Stewardship Fund, which is dedicated to sustaining and enhancing public and conserved lands in the Shasta-Siskiyou region of Northern California. Funds will finance stewardship projects to protect open space and build/maintain trails. 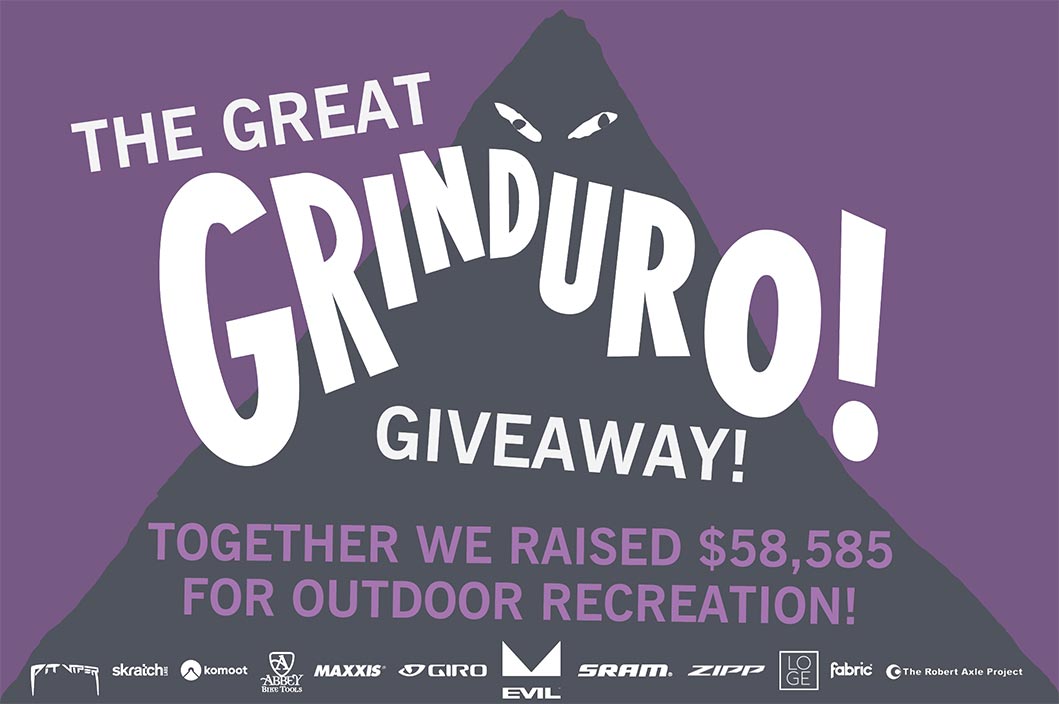 The success of this campaign would not have been possible without the support of Grinduro California’s partners. They put together two truly unbelievable prize packages, including a gravel and mountain bike from Evil built with premium components from SRAM, Zipp, Maxxis, and Fabric, plus a head-to-toe kit from Giro, and so much more. For every $5 contribution to SORA’s Siskiyou Stewardship Fund, supporters received one entry into a random drawing for these two prize packages. There were over 11,700 entries, and we know you’re ready to find out who won… 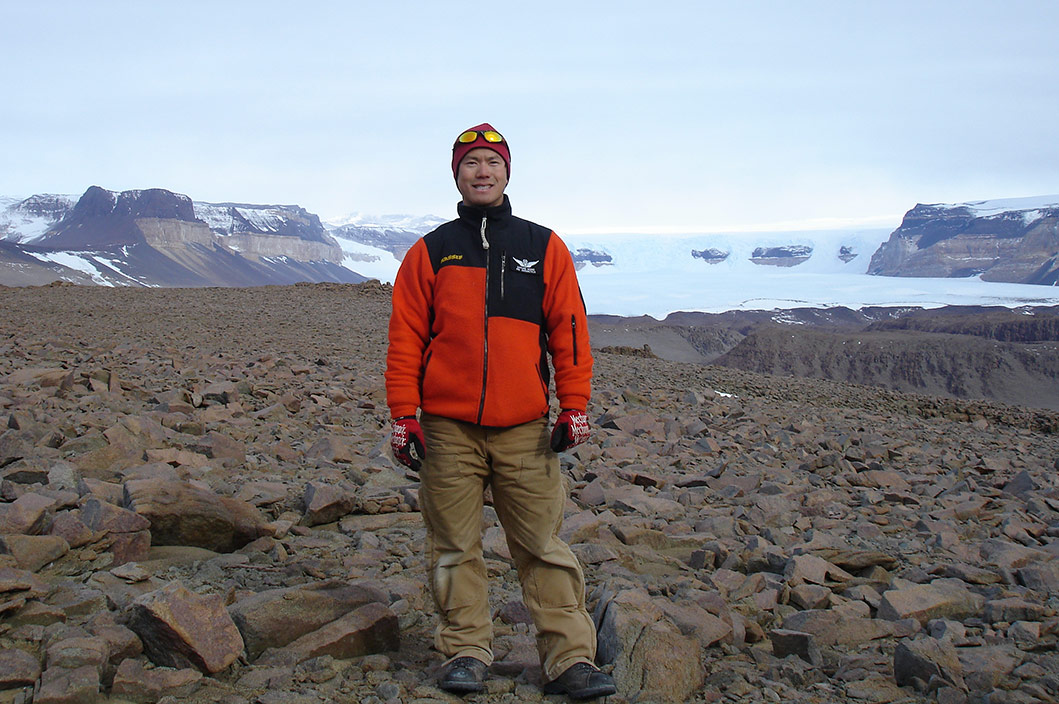 Mark Killing lives in the North East of England, and he is surrounded by amazing gravel roads that used to be old mining railroads. Soon he’ll be riding those roads on a brand new Evil Chamois Hagar gravel bike! Everybody at the 2021 Grinduro Wales will be lucky to see this stunner of a bike because he’s planning to be there for the good times.

G Wong lives in Washington D.C., and the timing of his win couldn't be better. His mountain bike was stolen a few years ago, and he's only had a townie bike and road bike since then. He just started shopping for a new mountain bike, and even had his browser window open looking at mountain bikes when we called him with the good news. Obviously he couldn't be happier about winning an Evil mountain bike!

We had a little Q&A with Mark and G Wong to get to know them better. Here’s what they had to say…


How does it feel to win the Great Grinduro Giveaway's Prize Package?!

GW: It feels amazing to win the Great Grinduro Giveaway’s MTB Prize Package! I’ll admit that I’ve never really won anything before, and even more wild – I had my Specialized Stumpjumper S-works stolen my first year working in DC. Your call about the prize literally came in the middle of my researching for a “replacement” MTB.

Why did you support this campaign, and why is it important to you to support outdoor recreation access and trail maintenance?

MK: I chose the campaign as I'm a big believer in giving back with trail maintenance, regardless of the location. During these unprecedented times the benefits of trail use for all riders regardless of experience or fitness is more important than ever, as we all know the mental and physical benefits of exercise in the great outdoors.

GW: I supported this campaign because I’m a fan of this part of California and, in particular, because I want to support increasing access to outdoor recreation. Granted, I don't know about every project SORA is involved with, but I generally feel that increased access to the outdoors for all folks helps provide them with rich experiences and enables them to get behind informed stewardship and environmental conservation policies. It’s one thing to read about how special a natural place can be, but it’s an entirely different energy and feeling if you can experience first-hand a special place in nature.

What type of riding do you typically like to do?

MK: I ride mainly gravel locally with the odd bit of XC riding. I live in the North East of England, with a huge network of old mining railroads now repurposed into gravel tracks. On top of that I'm an hours drive away from Kielder Forest, with its hundreds of miles of wilderness gravel routes and mountain biking trails.

GW: I’ve done city, road, and mountain biking. Right now, living on the east coast, I’d say most of my riding is city-riding (e.g., commuting to work, riding to get to a tennis match, rushing to improv rehearsal). However, I’d say I miss mountain biking the most.

Mark, where are your favorite places to ride gravel bikes?

MK: Fave places to ride? Kielder Forest without a doubt, closely followed by North Wales and around Snowdonia.

GW: I can’t say that I have a typical mountain bike spot at the moment (see my first answer), but I’ve enjoyed riding trails in Northern CA, CO, NH, and UT.

Mark, what gets you most excited about winning the Evil Chamois Hagar gravel bike?

MK: I'm totally excited about the frame, curious to see how it rides. That and the SRAM AXS gears, I've never ridden electric gears.

G Wong, which Evil mountain bike model are you going to choose and why?

GW: I’m leaning toward the Calling. A fantastically light, competent 27.5” bike with XC tendencies – sounds about my speed.

Have you ever been to Mt. Shasta, CA? If not, how about CA in general?

MK: I've never been to California, though with a Sister-in-law now living in Larkspur, it's top of the list of places to go ride very soon!

GW: I have – Mt. Shasta is so beautiful! Being from California, I really appreciate western vistas and the variety of wilderness within the Golden State.

Have you ever raced Grinduro? If not, will you add it to your schedule in 2021?!

MK: I have never raced Grinduro, and had hoped to do so this year as the Wales event was literally a ten minute drive from where my sister lives in Borth! I will without a doubt be riding it next year all being well!

GW: No, I’ve never raced Grinduro… yet. I’ll definitely work to add at least one to my schedule in 2021.

You won free entry to all Grinduro Global events for yourself and a friend! Which locations would you be most excited about (California, Canada, Wales, Australia, Switzerland, or Japan)?

MK: Wales because of the locality, California because we can visit family too, and finally I'd love to do Japan as to visit there would be a dream come true!

GW: I’m most excited about the California and Canada races, if only because they're the easiest to travel to. But all of them sound amazing!

Is your party-to-race ratio leaning more towards party or race, or is it right in the middle?

GW: If I had to guess, I’d say my party-to-race ratio would be right in the middle: 50% party and 50% race. I'll let you know after my first Grinduro!

Thanks again to everybody who made the Great Grinduro Giveaway such a success, especially the amazing Grinduro California partners for creating two amazing prize packages. SORA is grateful for the incredible support, and they are already hard at work making sure the 2021 Grinduro California provides two years’ worth of good times. We’ll see you there!